Definition: Traverse is a series of connecting lines or paths. This process is called traversing.

Let us assume an area and some points over there, connecting all points by traversing through these points for survey of that area is Traverse. 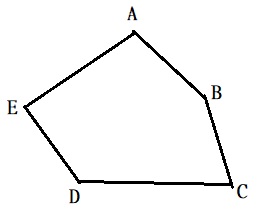 There are two types of traverse surveying.

When a series of connected lines extends along a common direction and does not return to the starting point, it is known as an open traverse or (unclosed traverse).

When a series of connected lines forms a closed circuit, i.e. when the finishing point meets with the starting point of a survey, it is called a closed traverse.

Closed traverse is suitable for the survey of boundaries of ponds, forests, etc. 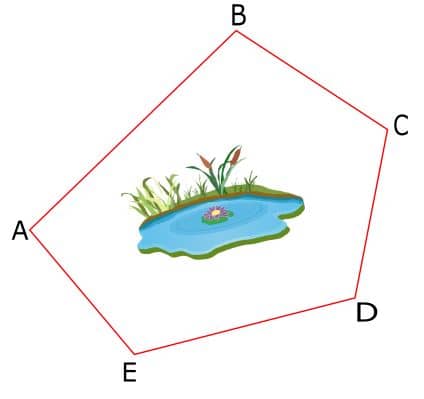 There are four different methods of traversing.

As the name indicate the method of traversing in which the whole work is performed with the chain and tape is called chain traversing.

In chain traversing, there is no angle measurement is used and the directions of the lines are fixed entirely by linear measurements. Angles fixed by linear or tie measurements are known as chain angles.

This method is incompatible for accurate work and is generally used if an angle measuring instruments such as a compass, sextant or theodolite is available.

As the compass is used at all stations so that may be subjected to local attraction that might cause an error. So it is not so highly accurate.

There are two methods of theodolite traversing:

In this method, at all stations, we have to measure only the included angles. We don’t use a compass. So it is a more accurate method among all methods.

In this method, we do not use any theodolite and compass for traversing. Only we have to use a table at site and plot all the points along the traversing and also calculate the linear measurements.

This is a very easy and quick method of traversing.

We plot the traverse with the help of Latitude and Departures.

For understanding the terms ‘Latitude’&’Departure’ let’s consider two axes NS and EW also a line AB that makes an angle ‘θ‘ with the NS axis and let ‘l‘ be the length of line AB. 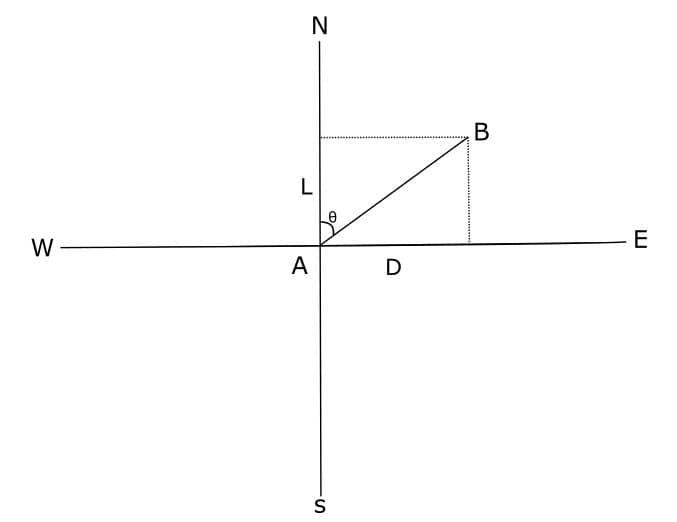 So Projection of a line ‘AB’ on the ‘NS’ axis is called Latitude.

Projection of a line ‘AB’ on the ‘EW’ axis is called Departure.

It is very important to understand the signs for plotting a traverse. 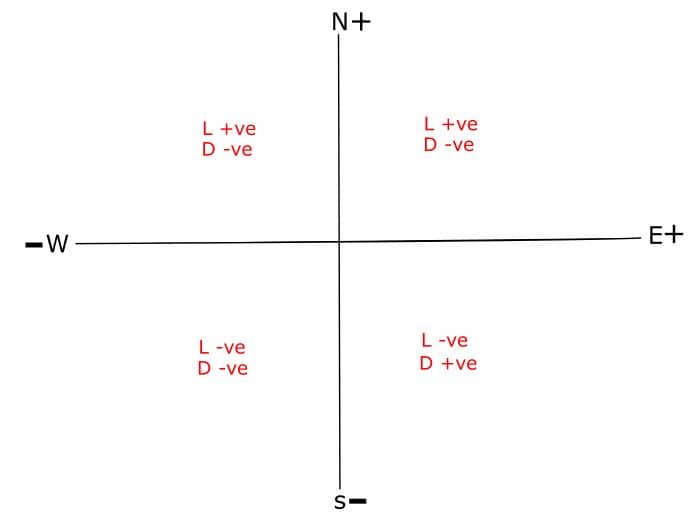 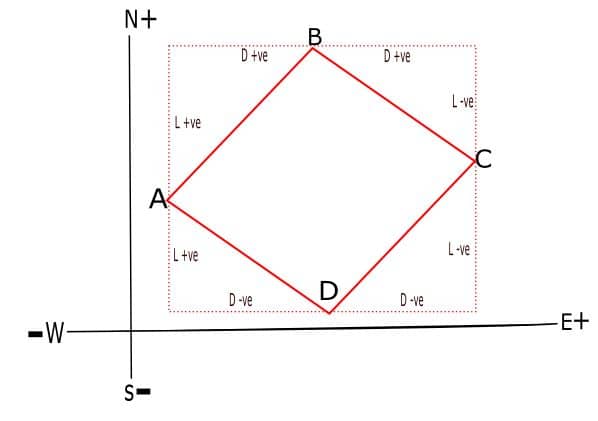 In the above close traverse ‘ABCDA’ line AB lies on the 1st Quadrant. So latitude (L) is positive (+ve) and Departure is also positive (+ve).

Line BC lies on the 2nd Quadrant so Latitude L is negative (-ve) and Departure D is (+ve).

If the Sum doesn’t come zero then there is some error.

Suppose if we do not reach the point A after traversing then there is some error and we reach another point.

Let us assume that point ‘E‘.

After knowing these two values we can calculate the net error value.

# As we got this error while closing the traverse so this is a closing error.

For calculation of error

The sum of all latitudes is zero i.e.

The sum of all departure is zero

Methods for correction of errors

There are two assumptions in this method:-

(a) Correction in latitude of line:

Where l1is the length of the individual line.

Σl is a sum of all lengths of line

(b) Correction of Departure:

(a) Correction for latitude:

Where LT is  a sum of all latitudes

(b) Correction for Departure: