What are the Great Pyramids of Giza?

The Great Pyramids of Giza have a history of almost 4,500 years. They were the tallest surviving man-made structures. They are present for a very long time and were constructed as gigantic tombs. At present, they are the only ones of the original Seven Wonders of the Ancient World.

Why Visit the Great Pyramids of Giza?

This construction is among the Seven Wonders of the World. It is the only ancient marvel that is still available. In 1979, they were also elected a UNESCO World Heritage Site.

The pyramids are more than just outwardly visible buildings. Each part of a building contains temples, tombs, and other structures. They were constructed by the architects of ancient Egypt. Every year, millions of tourists travel to Egypt to see the Giza Pyramids.

Also Read: 15 Most Beautiful Buildings of the World

The pyramid has four equal sides. Each side is about 755 feet in height. The overall height of this building is roughly 482 feet (147 metres) (230 m). High-polished limestone casing stones covered the sides of the building. These stones weighed about 15 tons. These tiles have given the structure a shiny appearance in the sun. 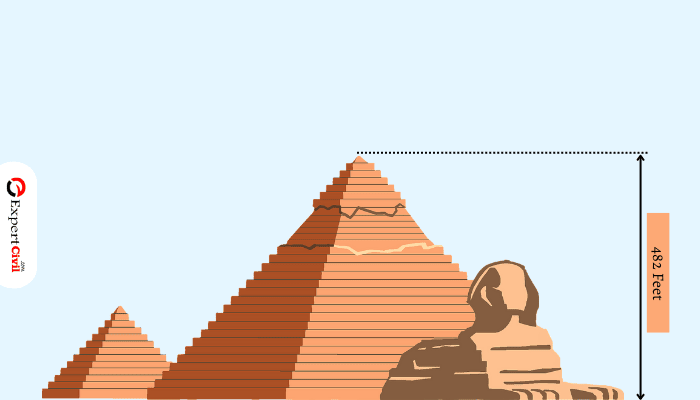 The Pyramids of Giza are a famous monument in Egypt. They are a significant aspect of its culture just like France’s Eiffel Tower. The amazing architecture is evidence of human achievement in the past. This building is made up of the following materials:

Who Built Great Pyramid Of Giza?

The great pyramid of Giza is located in Egypt. The location is as follows:

In architecture, a pyramid is a vast structure. It is covered in stone or brick with a rectangular base. It has four sloping triangular sides that come together at an apex. The architect of this pyramid has its own beauty on its own. The most well-known buildings are from Central and South America, as well as Egypt.

The only example of one of the Seven Wonders of the World is the Great Pyramid. It is a wonder mostly. Because it’s scale and extraordinary precision make it the largest structure ever built.

The Great Pyramid of Giza Facts

Top 10 facts about the Great Pyramid of Giza are given as follows:

1. The Pyramids in Egypt are Just Outside of Giza

The Pyramids of Giza are not situated in the middle of the desert. But the photographs gave such an impression. The third-largest city in Egypt is Giza. It is situated on the western bank of the Nile and on the Giza Plateau. These structures are located on the eastern borders.

2. Egypt Has a Lot of Other Pyramids

There are other pyramids in Egypt besides the great Pyramids of Giza. In Egypt, there are still 130 more pyramids to explore. In actuality, there are a total of nine pyramids. They are all located just on the Giza Plateau. These include the Red Pyramid, the Pyramid of Unas, the Bent Pyramid, etc.

3. The Giza Pyramids are not the first to be constructed

4. Grave robbers have stolen from the Giza Pyramids.

Like many other royal tombs, the Pyramids of Giza have been robbed over the years. Grave robbery was fairly frequent in ancient Egypt. It was famous that architects buried their belongings. That’s why robbery has happened several times. The pyramids have been robbed within 500 years. It occurred till its completion and was sealed as a result.

5. The Great Pyramid’s Sides Point in the Directions of the Cardinal Points

The Great Pyramid of Khufu’s sides is oriented with the four cardinal directions. Even though we don’t fully understand how they attained this level of precision. It’s apparent that they based their calculations on the sun and stars.

6. Thousands of People Worked to Build the Giza Pyramids

The Pyramids of Giza were constructed by a constant workforce. Their strength was between 20,000 and 40,000 individuals. It was revealed by discoveries unearthed at the Giza worker’s hamlet. This includes laborers, stonemasons, builders, engineers, and more. Most of them were local residents who work tirelessly to erect the pyramid. They did it for food and daily compensation.

7. There Are More Than 2 Million Stone Blocks in the Great Pyramid.

The Great Pyramid of Khufu was built using more than 2.3 million stones. This contained 8,000 tones of granite and 5.5 million tones of limestone. The stones were either mined at Giza or carried by sea from distant locations. They were weighing anywhere between 25 and 80 tons each.

The three Pyramids of Giza were shielded from the sun’s rays. They did it with a white polished limestone casing. These limestone casings have vanished over time due to earthquakes. They were also utilized to construct new buildings.

9. The Pyramids Have Grown Smaller Over Time

Pyramids are considerably smaller than the original ones. They were eroded over thousands of years. Also, their exterior coverings were removed. Originally this building had 481 feet in height. Now, the Great Pyramid of Khufu is just 455 feet tall. The height of the Pyramid of Khafre has decreased. The Menkaure pyramid is the smallest of the pyramids. It was 218 feet tall but is now 203 feet tall.

10. They were designated a UNESCO World Heritage Site 12

Along with the other historic structures, the Pyramids of Giza were nominated. They were named a UNESCO World Heritage site in 1979. Egypt’s capital was located in the historic city of Memphis. Its locality contains a number of historic cemeteries. It is including the Giza Necropolis, Saqqara, and Dahshur.

The Great Pyramid Of Giza Images 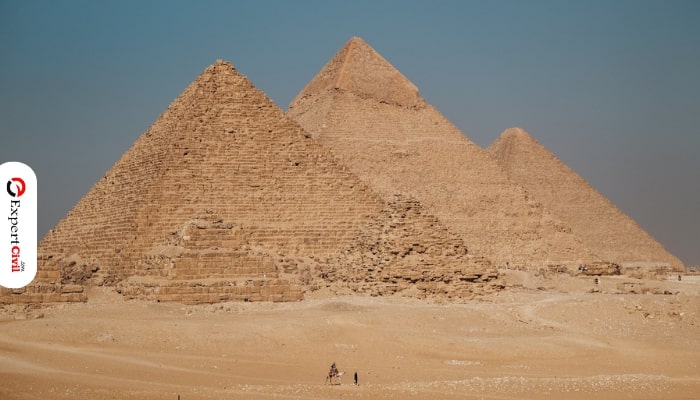 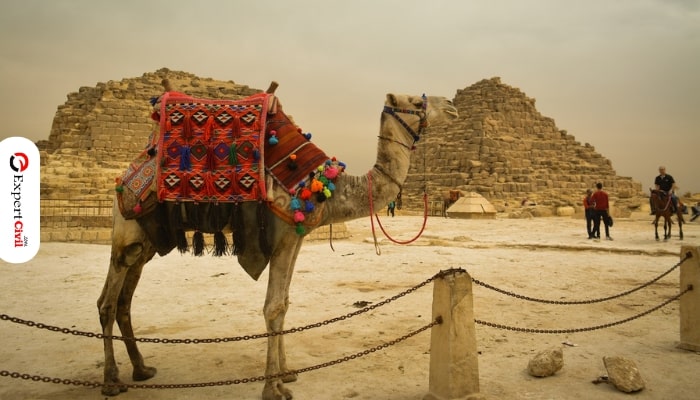 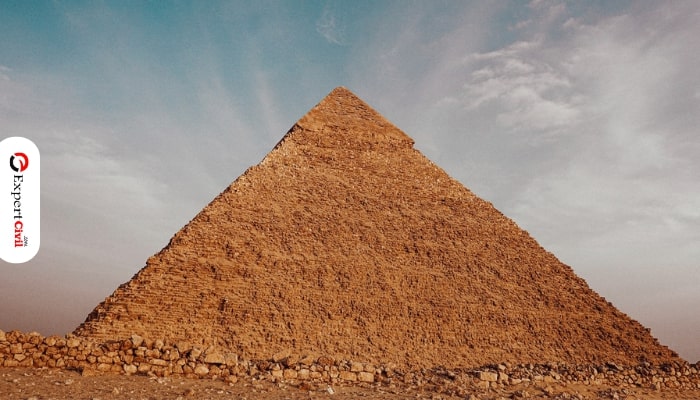 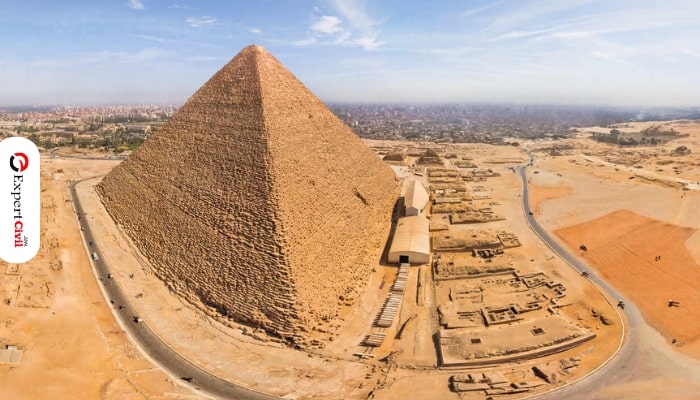 The Future of the Pyramids

Tourism structure has drastically decreased. It occurred at the start of the Arab Spring in 2011. At that time, Egypt went through a political crisis. Since then, the nation has had a number of administrative changes. As a result, the future of tourism to the Pyramids is questionable.

The Great Pyramid Of Giza Is In Which Country?

This structure is among the ancient Seven Wonders of the World. The Great Pyramid of Giza is a defining icon of Egypt. It was constructed over a twenty-year period. It was established during the rule of King Khufu of the 4th Dynasty. It is situated on the Giza plateau close to the contemporary city of Cairo.

What Does The Great Pyramid Of Giza Look Like?

The pyramid-shaped by the ancient Egyptians for their royal tombs at Giza is amazing.  Other burial sites of the structure are still up for contention among historians. The shape’s meaning has been the subject of several ideas. It confirms that the pyramid serves as a staircase for the architect’s ka to ascend to the sky. It also shows old mound creation and the sunrays spreading throughout the planet.

Is The Pyramid Of Giza Still Standing Today?

Yes, it is still a standing structure. It is one of the most visited tourist destinations in the Giza Complex. It is among the worldwide tourist location. In 1979, they were designated a UNESCO World Heritage Site. They were just nominated in honor of their historical significance. The Egyptian Ministry of Tourism is also working to modernize the Giza Pyramids. Then, it helps to improve accessibility and advance travel to Egypt.

Does The Pyramid Of Giza Have 8 Sides?

Yes, the Great Pyramid has eight sides. They do not have four sides as is commonly believed. The four sides of the pyramid are evenly divided from base to tip. They are distributed by very minute concave indentations. A British Air Force pilot by the name of P. Groves discovered this thing in 1940. He made this discovery while flying over the pyramid.

In this article, you will learn about the great pyramid of Giza. The history, facts, height, and location are mentioned with each detail. I hope, you will get enough knowledge about this topic. If any queries, then do let us know in below comment section.

Also Read: Top 15 Most Beautiful Cities of the World