The T critical value is important in statistics. It is used to determine the significance of a test or statistic.

What is T critical value?

The t critical value is the number of standard deviations from the mean that a given statistic is. A test or statistic with a t critical value that is greater than 2 indicates that the data may be significant at the 5% level. This means that there is a 5% probability that the observed results were due to chance rather than the true difference between groups or populations.

Explanation of the T critical value

To calculate the t critical value, you need to know two things:

For example, if you want to measure whether boys and girls ages 8-10 have different math ability levels, then you would need an independent sample size of 25 participants each from both groups (95% confidence interval = 18-32).

What is the degree of freedom and significance level in critical value?

Below is a brief introduction to these terms along with examples.

The Significance Level of Critical Values

The critical value is the point on the rejection region that marks off the highest significance level. To find this value, we need to know three things: 1) The degree of freedom (df), 2) The alpha level or significance level, and 3) Whether we are looking for a one-tailed test or a two-tailed test.

For example, if we are testing whether there exists a difference between two groups, our degrees of freedom would be n-1 and n-2. Our alpha level could be 0.05 or 5%. And finally, we would want to know if we are looking for an upper confidence limit (UCI) or a lower confidence limit (LCI).

The Degree of Freedom of Critical Values

The t critical value is the value of t for which the null hypothesis can be rejected with a given level of significance. Understanding this value allows us to determine when we can say something exists or does not exist and how likely it is that this could have occurred by chance alone.

For example, if we observe an effect at a certain magnitude and it meets one or more criteria associated with a particular critical value, then we can assume that this effect exists and should be further investigated.

However, if no effects meet any criteria associated with a particular critical value, then we cannot assume anything about this effect and must continue our investigation in order to determine what might have caused it.

How to calculate the t-critical value?

The t-critical value is the value of t beyond which we can be confident that the null hypothesis is false. To calculate this value, we need to know the degree of freedom (df) and the significance level.

A critical value calculator can be used to calculate the t-critical value by taking the degree of freedom (df) and the significance level. Or you can use the t-distribution table for manual calculations. 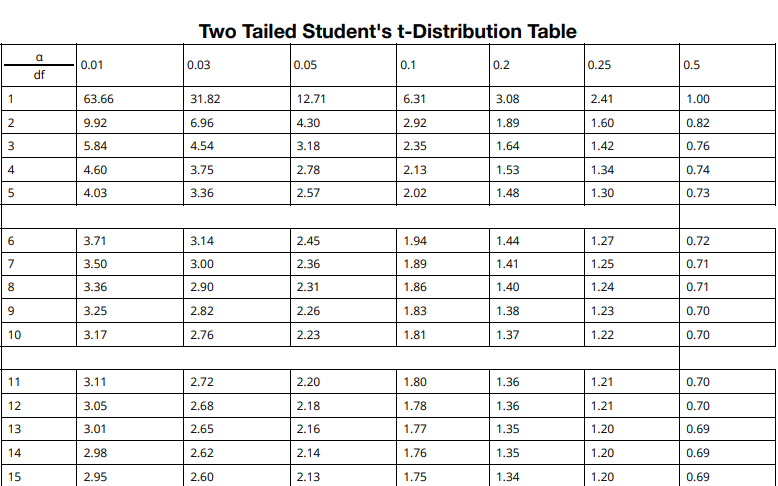 If you find that your experiments have a probability greater than 0.05 of reaching one of these critical values by chance alone, then it’s safe to assume that your results were not due to chance and they were actually real!

Here is an example of t critical value for understanding it more accurately.

Evaluate the t-critical value if the significance level (α) is 0.05 and the number of samples (n) is 35.

Step 1: First of all, write the given sample size and significance level. After that calculate the degree of freedom (n – 1).

Step 2: Now choose the tail of the experiment you want to calculate i.e., one-tailed or two-tailed.

Step 4: Now find the given value of the degree of freedom in the first column of the t table.

Step 5: After that find the given significance level in the first row of the t-distribution table. And take the value where both the terms intersect. That value will be the t critical value.