Civil engineering has helped build some of the greatest structures in the world. Accompanied by the creative designs of an architect, these builds can, not only look amazing, but they can include a scary element bringing a different element to them.

Glass bridges cascade in beautiful areas allowing you to appreciate the scenery around you providing a panoramic-like view around you. Today we’re going to be discussing some of the tallest and longest bridges in the world, some offering the added fear factor with each step you make.

All over the world, there are massive feet of engineering greatness—stunning designs and developments placed in picturesque settings highlighting their magnitude even more. One of the most stunning constructions ever built is the Zhangjiajie Glass Bridge in China. 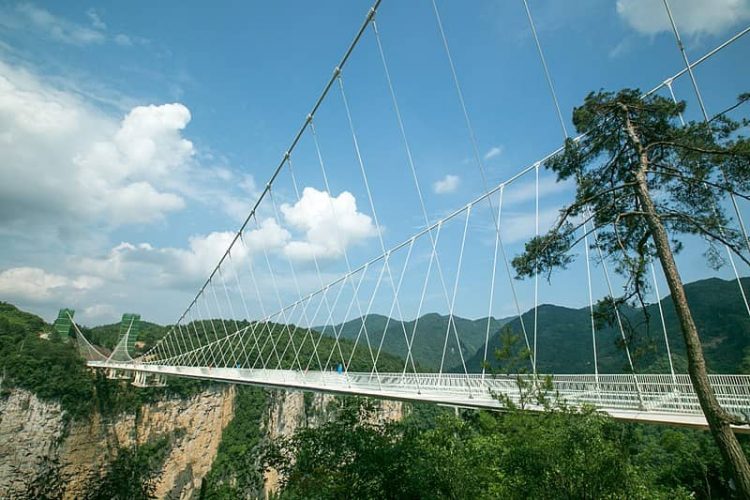 This suspension bridge began to take shape in 2015 with designs from Israel-based Architect Haim Dotam and Urban Designers with the vision of holding 800 people at a time. At the time of completion, it was the tallest and longest glass bridge in the world. Located in the Zhangjiajie National Forest Park, this bridge is situated across the canyon caused by two mountain cliffs.

In its design and construction, this glass bridge has broken ten world records, one of them being the 935ft bungee jump provisions made to create the world’s largest jump.

The bridge itself is 980ft above the ground, measuring a total length of 1,410ft with a width of 20ft. When building the bridge, engineers built four pillars on the edge of the wall canyon to correctly complete this stunning glass bridge. Constructed with a metal frame and 120 glass panels, the Zhangjiajie Bridge allows you to take in the breathtaking views surrounding you. Each glass panel is made from 3-layered, 2-inch thick tempered glass, causing no concern for any breakages.

In August 2016, the Zhangjiajie Glass Bridge was opened to the public, making it the largest glass bridge that had ever been constructed. 13 days after opening, the bridge was closed down by authorities. The scale of architectural design and beauty meant thousands of people came to see this awe-inspiring development. Projected figures predicted around 8000 visitors per day, but this was exceeded by 10x the amount with reports of 80,000 visitors.

Due to this high volume, the bridge was closed to ensure the construction could withstand the extra weight as it was initially only developed with 800 people on the bridge at one time.

The bridge finally reopened 28 days later, on September 30th, and has been open ever since.
Fast-forward to today, and there has been a longer glass bridge designed and constructed in the scenic area of China’s Hebei province, leaving the Zhangjiajie Glass Bridge with the title as the highest glass bridge in the world.

A deliberate swing design has been created, striking fear in all those who walk along it. And with an entire glazed walkway, visitors can admire the 218-meter drop as they start their trip with scenic forests, waterfalls, and mountain scenery. 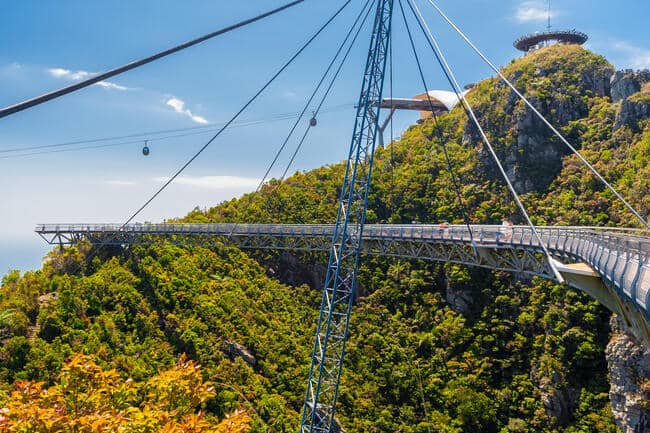 The glass bridge has been produced with 1077, 4cm thick panels supported with cables weighing 120 tonnes, more than enough strength to hold the weight of 2000 people. Authorities have limited this structure to 600 tourists at any one time for extra safety precautions. Each visitor must wear protective coverings over their shoes to protect the glass panels as much as possible. Guards sit on either side of the bridge, ready to help any visitors who are frozen in their stride with fear from the deliberate swing.

Causing deliberate fear isn’t a new thing in the architectural world. Also situated in China’s Hebei province is the East Taihang Glasswalk bringing a new sense of dread to its visitors.

China has always been known for its bridges, with some architectural masterpieces being built over the years. The East Taihang Glasswalk brings a new sense of feat to its visitors. A 3,800ft tall construction that hugs the side of a mountain in the Hebei province. Completely glass-covered, but this wasn’t enough for its designers when it comes to fear.

There is an optical illusion to make the glass appear to be breaking under your feet as you walk along it. Vertigo sufferers may want to avoid this bridge or maybe looking for a new challenge to overcome their fear. 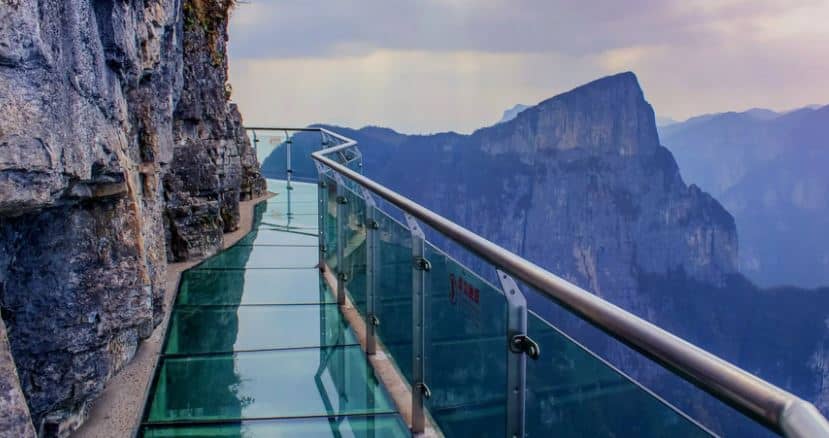 As tourists and visitors of the East Taihang Mountain Glasswalk begin to move across the glass bridge, a series of splintering cracks will appear like a spiderweb, instantly bringing the heart-pounding feeling of you beginning to fall through the floor and down the thousands of feet you’re above.

Great for all visitors and guests, this glass walk has never actually broken. The illusion is merely a hi-tech prank designed to strike fear in all those walking across this mountain bridge.

The splintering effect is captured by infrared distance sensors that track the movement of each visitor, triggering a dual visual and audio effect giving the impression that the walkway is about to shatter right underneath your feet.

It is clear that this prank is simply an illusion, with the cracks disappearing after just a few seconds. Still, this initial fear is a great way to get your heart racing and probably an excellent way to keep staff entertained working on this fantastic architectural construction.

The Coiling Dragon Cliff Skywalk is a crystal clear bridge that allows you to see the beautiful mountain scenery that surrounds it. Measuring 100 meters long and 1.6 meters wide, it isn’t the most giant glass bridge on our list, and with a height of around 1430 meters above sea level, it isn’t the highest either. 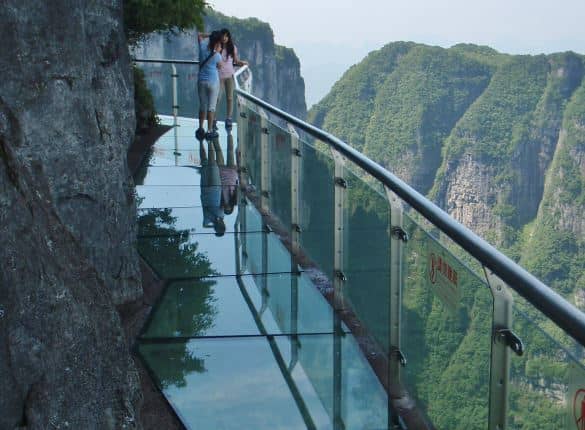 This being said, the Tianmen Mountain bridge provides incredible views of the beautiful landscapes Zhangjiajie has to offer. The see-through walkway will leave you both in awe and with those spine-tingling thrills, you get from seeing right underneath your feet.

All of these bridges have been designed with civil engineering teams working alongside architects and designers, helping to create these unique structures.

So what is Civil Engineering? Civil engineering is a professional engineering skill that works with the construction, design, and maintenance of both physical and natural built environments. This includes places such as roads, bridges, dams, canals, airports, pipelines, structural building components, railways, and sewerage systems.

Civil engineering is broken into a number of sub-disciplines and is considered the second-oldest engineering skill after military engineering.

These bridges have been designed with a team of architects and civil engineers, but civil engineers don’t only work on government standard structures such as bridges. Civil engineers such as SB Civils have been working for clients since 2015. With meticulous planning and years of experience, this team can bring your ideas to life regarding feasibility, conception all the way to handover.