What is the lever method?

The Lever method of irrigation is an irrigation system that is adopted by villagers in ancient times. It is a typical traditional method used by farmers to irrigate their crops. In this method ropes and containers are used to take out the water from the large well. And further pouring it into the pipes which laid in the field up to its end. 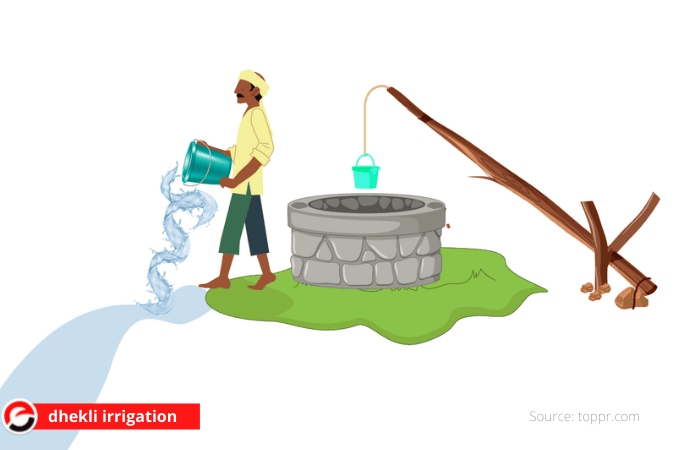 They spread water all over the field and fulfill the water requirement for crop growth. Some modern irrigation system nowadays includes a non-electronic automatic system using containers and ropes similar to this lever system which is also known as the dhekli irrigation system.

Another traditional method is also known as the lever method system which is also used in ancient times by local villagers to irrigate, they’re filed in places like Africa and the middle east etc. This is mainly used where large wells are available. But it is also very economical and efficient for shallow wells.

Where two large wheels are used over the well that is joined by a belt that has a number of containers on it that collect water from the well and spread it over the field with or without pipes. It is also known as the Persian wheel method or rahat system of irrigation internationally. It is like a chain pump but rather than pump oxen are used.

before discussing the method we understand what irrigation is? So it is a science to provide water to the land artificially. The Crop needs water for growth so an irrigation system is needed. Lever method of irrigation used in villages to supply water for the nearby field. 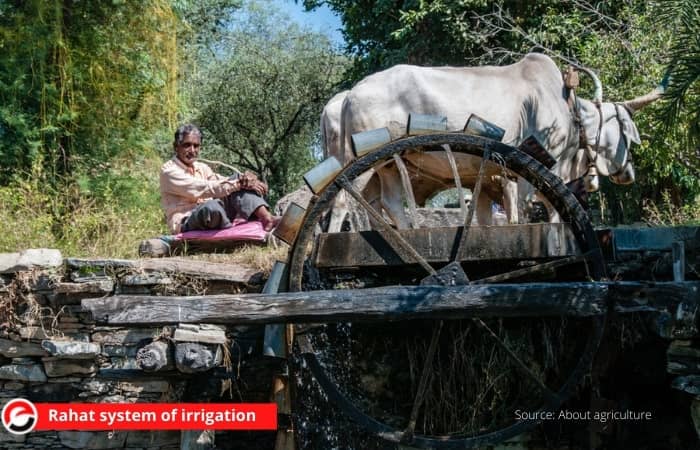 This is an ancient method of irrigation. This method required a large well in which two large wheels can be used. And an animal like a cow, buffalo, or used to rotate the wheel so water comes out from the pot and supplied to the pipes laid on the field and used for irrigation and spread over the crops. This method is primarily used in subcontinent places like Africa and the middle east etc.

This method is used when water needs to take out from large wells in villages. As per the traditional method it is done by using ropes and containers simply and lifting out the water through that and pouring it into pipes or spreading it over the field as needed.

Another way of lever system used in old times is used to take out from well through oxen in subcontinent places. It is a very economical and efficient method of irrigation to lift out water from shallow wells of height up to 3.5m to 4.5m. 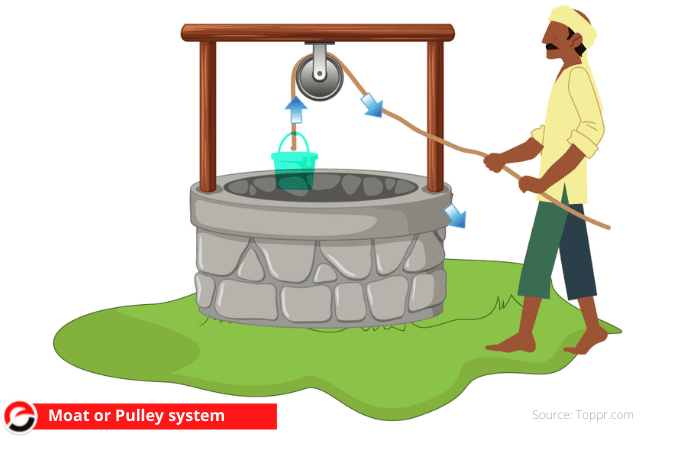 This lift structure consists of a strong log laid across a fulcrum. And bucket is attached to its long arms by rope or something which can hold and on another side also heavyweight is attached to the log. So when the bucket is filled someone can manually release the rope and it will come up and be emptied to the field channel for irrigation again lowered down into the well to fill up. this type of irrigation method is known as moat or pulley system.

Advantages of lever method of irrigation

Advantages of the lever method are:

Disadvantages of lever method of irrigation

Disadvantages of the lever method are: