Drying and Burning of Bricks

Bricks are burned at high temperature to gain the strength, durability, density and red colour appearance. All the water is removed at the temperature of 650 degrees but they are burnt at a temperature of about 1100 degrees because the fusing of sand and lime takes place at this temperature and chemical bonding takes between these materials after the temperature is cooled down resulting in the hard and dense mass.

Bricks are not burnt above this temperature because it will result in the melting of the bricks and will result in a distorted shape and a very hard mass when cooled which will not be workable while brickwork.

Bricks can be burnt using the following methods:

Clamp Burning: Clamp is a temporary structure generally constructed over the ground with a height of about 4 to 6 m. It is employed when the demand of the bricks is lower scale and when it is not a monsoon season. This is generally trapezoidal in plan whose shorter edge among the parallel sides is below the ground and then the surface raising constantly at about 15 degrees to reach the other parallel edge over the ground. A vertical brick and mud wall is constructed at the lower edge to support the stack of the brick. The first layer of fuel is laid as the bottom most layer with the coal, wood and other locally available material like cow dung and husk. Another layer of about 4 to 5 rows of bricks is laid and then again a fuel layer is laid over it. The thickness of the fuel layer goes on with the height of the clamp.

After these alternate layers of the bricks and fuel, the top surface is covered with the mud so as to preserve the heat. Fire is ignited at the bottom, once the fire is started it is kept under fire by itself for one or two months and the same time period is needed for the cooling of the bricks.

The kiln is a large oven used for the burning of bricks. Generally, coal and other locally available materials like wood, cow dung etc can be used as fuel.

They are of two types:

Intermittent Kilns: these are also the periodic kind of kilns because in such kilns only one process can take place at one time. Various major processes which take place in the kilns are Loading, Unloading, Cooling, and Burning of bricks.

There are two kinds of intermittent kilns:

These kilns are called continuous because of all the processes of loading, unloading, cooling, heating, pre-heating take place simultaneously. They are used when the bricks are demanded in larger scale and in short time. Bricks burning are completed in one day, so it is a fast method of burning. There are two well-known continuous kilns:

Bull’s Trench Kiln: Bull’s trench kiln (fig.2.8) consists of a rectangular, circular or oval plan shape. They are constructed below the ground level by excavating a trench of the required width for the given capacity of brick manufacturing. This Trench is divided generally in 12 chambers so that 2 numbers of cycles of brick burning can take place at the same time for the larger production of the bricks. Or it may happen that one cycle is carried out at one time in all the 12 chambers by using a single process in the 2-3 chambers at the same time. The structure is under-ground so the heat is conserved to a large extent so it is more efficient. Once the fire is started it constantly travels from one chamber to the other chamber, while other operations like loading, unloading, cooling, burning and preheating taking place simultaneously. 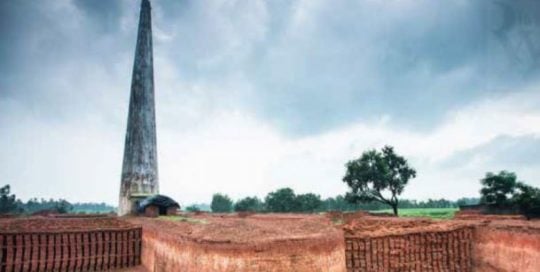 Such kilns are generally constructed to have a manufacturing capacity of about 20,000 bricks per day. The drawback of this kiln is that there is not a permanent roof, so it is not easy to manufacture the bricks in the monsoon seasons.

Hoffman’s Kiln: The main difference between the Bull’s trench kiln and the Hoffman kilns are: