Moulding: The clay which is prepared as above is then sent for the text operation of moulding.

Following are two types of moulding:

Hand moulding: In hand moulding, the bricks are moulded by hand i.e.; manually. It is adopted where manpower is cheap and is readily available for the manufacturing process of bricks one small scale.

The moulds are rectangular boxes which are open at top and bottom. They may be of wood or steel. It should be prepared from well-seasoned wood. The longer sides are kept slightly projecting to serve as handles.

The strips of brass or steel are sometimes fixed on the edges of wooden moulds to make them more durable. It is prepared from the combination of steel plate and channel.

It may even be prepared from steel angles and plates. The thickness of steel mould is 6mm. They are used for manufacturing bricks on a large scale. The steel moulds are more durable than wooden one and turn out bricks of uniform size. The bricks shrink during drying and burning . The moulds are therefore made larger than burnt bricks (8-12%). 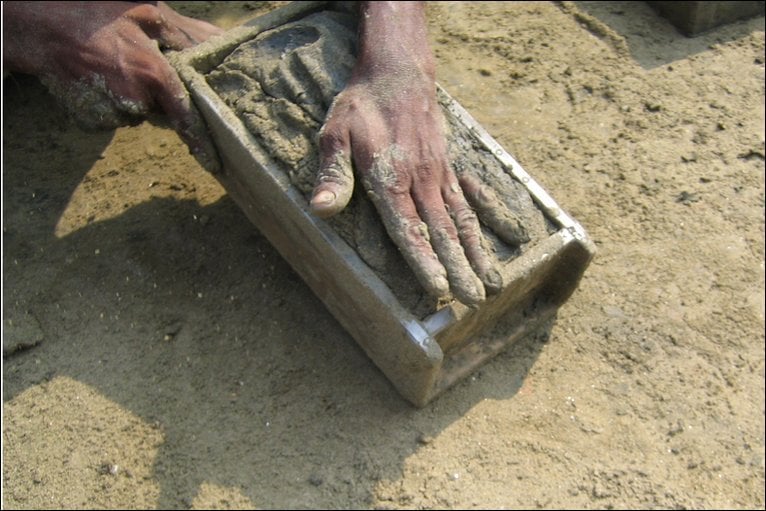 The bricks prepared by hand moulding are of two types:

Ground moulded bricks: The ground is first made level and fine sand is sprinkled over it. The mould is dipped in water and placed over the ground. The lump of tempered clay is taken and is dashed is the mould.

The clay is pressed in the mould in such a way that it fills all the corners of the mould. The surplus clay is removed by wooden strike or framed with wire. A strike is a piece of wood or metal with a sharp edge. It is to be dipped in water every time.

The mould is then lifted up and raw brick is left on the ground. The mould is dipped in water and it is placed just near the previous brick to prepare another brick. The process is repeated until the ground is covered with raw bricks. The lower faces of ground moulded bricks are rough and it is not possible to place frog on such bricks. A frog is the mark of depth about 10mm to 20mm which is placed on raw brick during moulding.

The ground moulded bricks of better quality and with frogs on their surface are made by using a pair of pallet boards and a wooden block. A pallet is a piece of thin wood.

The design of impression or frog is made on this block. The wooden block is also known as the moulding block or stock board.

The mould is placed to fit in the projection of wooden block and clay is then dashed inside the mould. A pallet is placed on the top and the whole thing is then turn upside down.

The mould is taken out and placed over the raw brick and it is conveyed to the drying sheds. The bricks are placed to stand on their long sides in drying sheds and pallet boards are brought back for using them again. As the bricks are laid on edge, they occupy less space and they dry quicker and better. 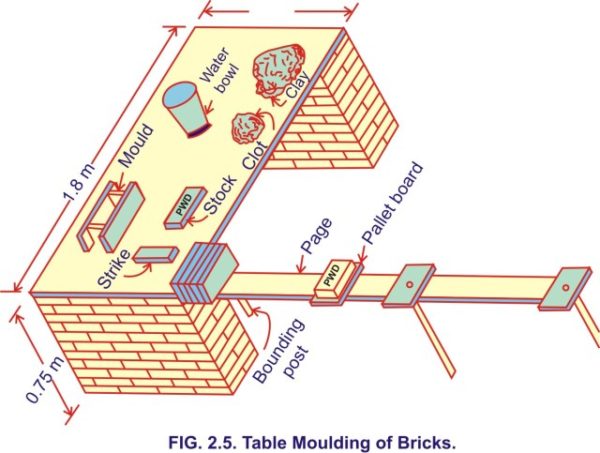 This type of moulding is carried out by two processes:

In these machines, the strong clay is finally converted into a powdered form. A small quantity of water is then added to form a stiff plastic paste.