When moisture is gradually decreased from the soil it shrinks. The shrinkage stops with no further volume change when an equilibrium is reached and that stage is called shrinkage limit. The water content below which a reduction in water content does not result in a decrease in the volume of the soil mass is known as the shrinkage limit. It’s also the lowest point at which the soil becomes saturated. 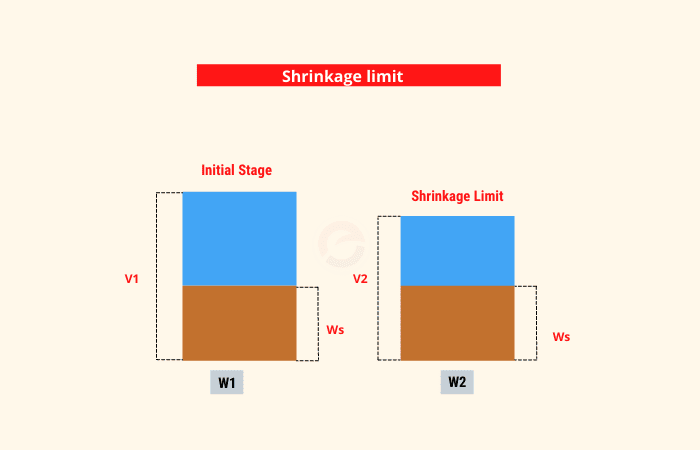 Take a round shrinkage dish with a diameter of 30 mm to 40 mm and a height of 15 mm, manufactured of porcelain or stainless steel. The dish has rounded internal corners and a flat bottom. At first, the dish is filled with mercury to find out its capacity. 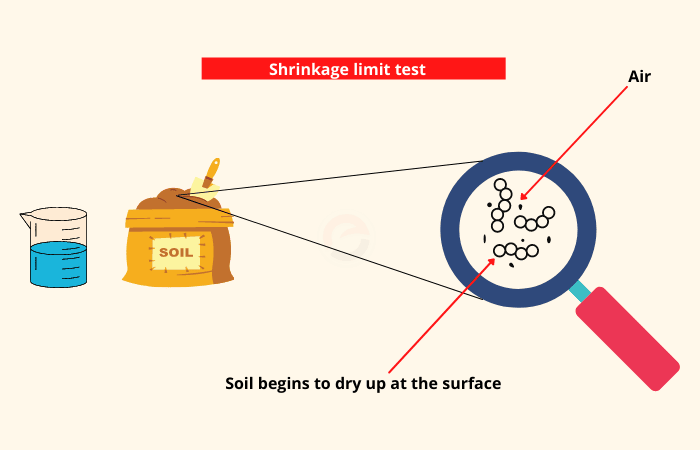 The soil pat in the shrinkage dish is allowed to dry in the air until it turns light in color. After that, it’s dried in an oven, and the dry soil mass is calculated as M2. To calculate the volume of the dry pat, in a huge dish, a glass cup with a diameter of 50mm and a height of 25mm is placed.

The cup is then filled with mercury, and the excess is removed by pushing a three-prong glass plate firmly over the top of the cup. The mercury-filled cup is transferred to a new dish. The dried part of the soil is withdrawn from the shrinkage dish and placed on the surface of the mercury in the cup, then pressed into it with the prongs of a glass plate.

The apparatus used in the shrinkage limit tests are a Shrinkage limit dish, a glass cup, a glass plate with prongs, a porcelain evaporating dish, a spatula, a plastic squeeze bottle with water, Mercury, watch glass, steel straight edge. 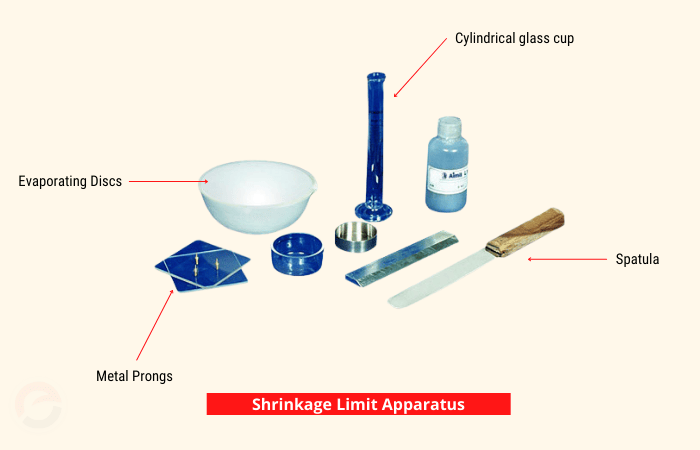 The shrinkage limit of soil is calculated by the formula:

Degree of saturation at shrinkage limit

There is a 100% saturation level at the shrinkage limit of soil.

What is the liquid limit of soil?

What is the plastic limit of soil?

The graph below depicts the transformation of soil from a solid to a liquid condition as its water content fluctuates. The Atterberg limits are the water content that corresponds to each state transition. The liquid limit (WL) is the point at which the soil transitions from a liquid state to a plastic state. At this point, all soils have a tiny amount of shear strength.

At shrinkage limit, the degree of saturation is

The shrinkage limit is code

In shrinkage limit, the volume of soil is

The density of water used in the shrinkage limit test is

How to find a shrinkage limit?