Aquifuge is a geological formation that is not porous nor permeable. There is an absence of interconnected openings so it cannot transmit water. Any massive compact rock without any fractures is called an aquifuge. Solid rocks are a type of Aquifuge.

What is an Aquifer?

An Aquifer is a saturated formation of earth material that not only stores water but also yields it in sufficient quantity. It is a permeable stratum or a geological formation of permeable material. Aquifers are capable of yielding large quantities of available groundwater under gravity. The aquifer transmits water relatively easily due to its high permeability. Sand and gravel of unconsolidated deposits form good aquifers. 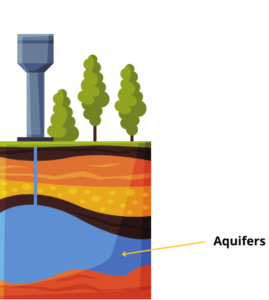 The groundwater availability of a place from an aquifer depends upon the rates of recharge and withdrawal. Aquifer allows both the transmission conduit and storage for water. Aquifers are found in different depths, lateral extent, and thicknesses. But based on the occurrence and field situation aquifers are classified into unconfined aquifers and confined aquifers. 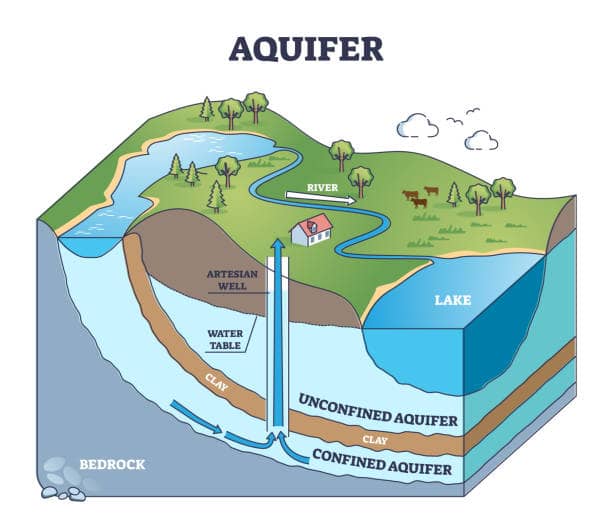 Aquiclude is a geological formation that is impermeable which means it does not allow the passage of water through it. But it is highly porous so it contains a large amount of water in it. The aquiclude is formed when an aquifer is overlaid by a confined bed of impervious material.  One example of aquiclude is clay.

Aquitard is a formation that only allows only the seepage of water and the yield from aquitard is very high when compared to an aquifer. Since it has a large amount of water there is a possibility of water escaping from the aquitard to the aquifer below it. These do not allow the flow of water underground because of its compacted layers.