Bleeding of Concrete: concrete has consisted of mainly four elements are Cement, Aggregate (Coarse and fine), Water, and Admixtures. The proportion of these elements is called concrete mix design. The mixing of their ingredients is very important. If these are not mixed properly, flaws in structure may occur which will cause a reduction in the strength and durability of concrete. 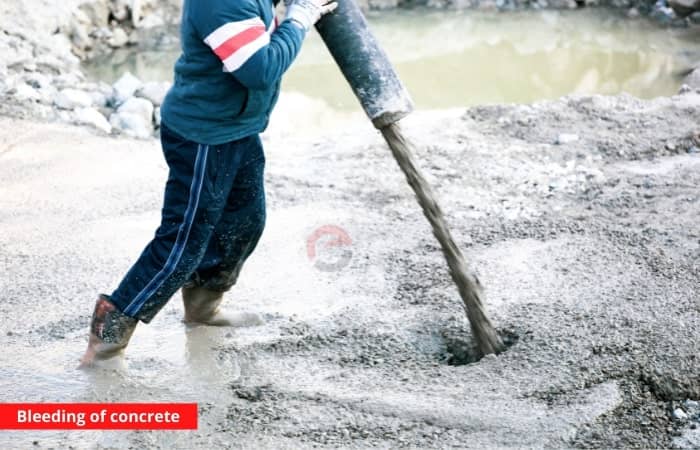 Bleeding is one of the concrete problems which occurs after laying and compaction fresh concrete if the concrete is not designed according to design. It is predominant in very high water-cement ratio concrete. Excess water in the concrete mix will rise upward to the concrete surface due to the settlement and solidification of cement. This process is called bleeding.

The water that came up to the surface makes a paste called “laitance” which on future drying makes a powder-like material called dusting of concrete.

There are two types of bleeding

Bleeding is not harmful if the rate of evaporation is equal to rate of bleeding. Normal bleeding helps in improving workability of concrete. Bleeding also replaces evaporation loss. Nominal bleeding prevents plastic shrinkage also. Use of highly wet aggregate increases bleeding in concrete.

The process of separation of solid particles especially coarse aggregate from fresh concrete resulting in uneven casting of structure and reduction in strength and durability is called Segregation of Concrete. It is caused due to a very high slump concrete.
Transportation, handling, and placing of concrete cause a jerking effect which causes segregation. If concrete is segregated during transportation, it should be remixed before placement. 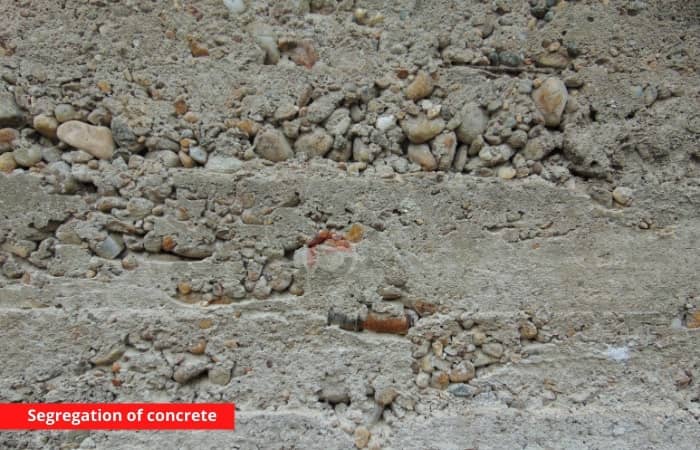 After the removal of shutting, there are hollow spaces left in the concrete surface which looks like honeybees’ nests. This is known as the honeycombing of concrete. Improper vibration and a bad slump of concrete cause this problem.
Junction points like beam to beam or beam to the column are the spots where this is predominant where there is jumbling of reinforcement. 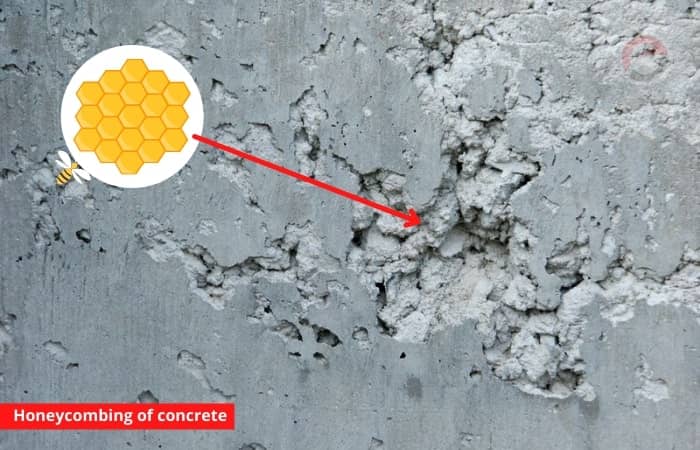 Effects of bleeding in concrete

Difference between Bleeding and Segregation

Causes of Bleeding of Concrete

Measurement of bleeding of concrete

B=  Ammount of water bleeded

W= Ammount of water used for making of concrete.

Prevention of bleeding of Concrete

Also Read: How to calculate cement sand and aggregate quantity in concrete?

FAQ’s on Bleeding of Concrete

Bleeding of concrete comes under which category?

Prevention of concrete bleeding can be achieved by using.

What is the Bleeding of fresh concrete?

The process in which freshwater mixed in the concrete rises upward due to capillary action is called bleeding of fresh concrete. The water is also pushed upward due to the settlement of heavier elements like coarse aggregate that pushes the water upward.