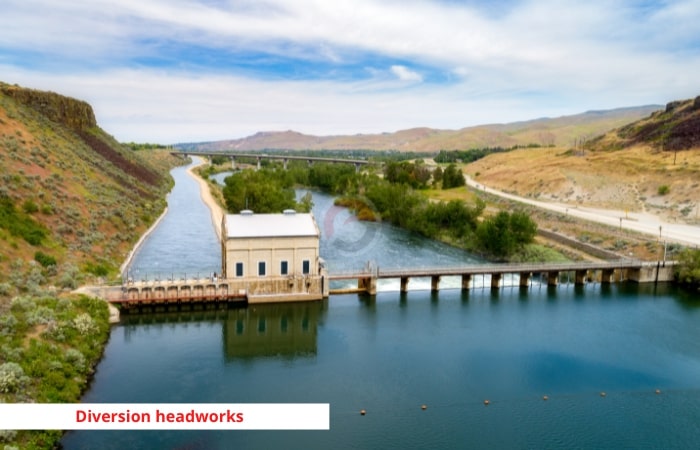 Diversion headworks are further classified as:

Temporary diversion headworks are made of bunds or some temporary structure across the river to raise the water level in the river and then diverted into the canal. these structures are temporary or not enough to survive during floods and may be damaged during floods so they need to be reconstructed after the floods.

There are many components of diversion headworks. Which are described as follows: 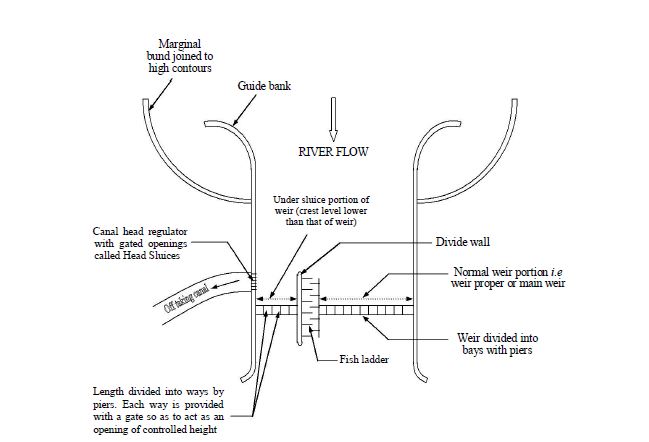 Weir is a structure constructed at 90 degrees to the flow of a river. So it obstructs the flow of water and raises the water in the river. On the crest of the weir usually, shutters are provided. Shutters allow water to pass through it when water is surplus to the weir. shutters are kept open to allow the surplus water to flow over the crest at the time of flood situation. Weirs are also made of different types of material and use different designs and they can be classified as: 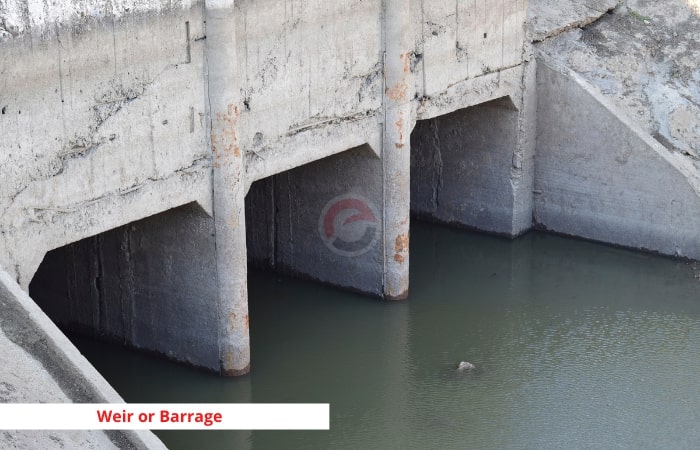 In the case of a barrage, the height of the crest is at a low level and mainly gates are accomplished over the crest. during the flood, gates are raised so the surplus water of the flood can be passed through over the crest with minimum afflux. Barrage can provide better control on raising the water level in the river but it becomes more costly comparatively.

Divide wall or divide grayon is constructed when the canal takes place in the system of diversion headworks. Suppose two canals are constructed to divert the water from a weir which is the opposite side of the river then two divide walls need to be constructed, one on each side. It is long masonry or concrete wall or grayon(protected by stone or concrete blocks on all sides) constructed at 90 degrees to the weir axis. The top width of the divide wall is around 1.5m to 2.5m. divide wall is extended a little bit more where the canal head regulator is situated on the upstream side, and on the downstream side up to the soil which has loose protection. 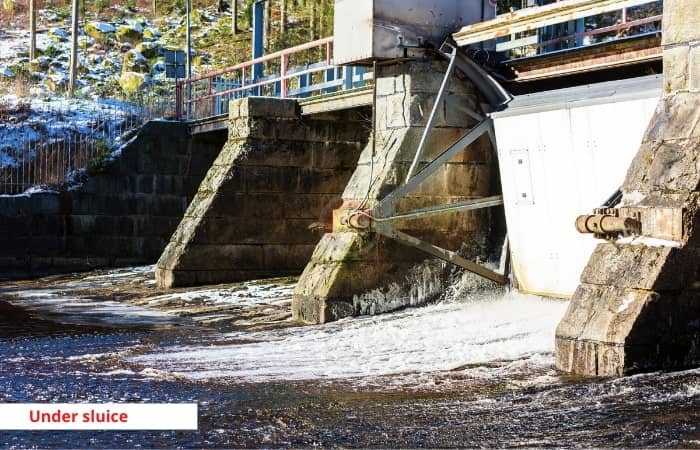 It is a structure constructed at the head of the canal from the upstream of the weir or barrage constructed.it is made like several piers are constructed with sufficient openings between them with gates in that opening supported by piers. It controls the flow of water that comes into the canal from the upstream. Generally, 6 to 8m spans are provided with steel gates which can be either operated manually or automatically. Larger spans are used in the case of having more space and a high economy. 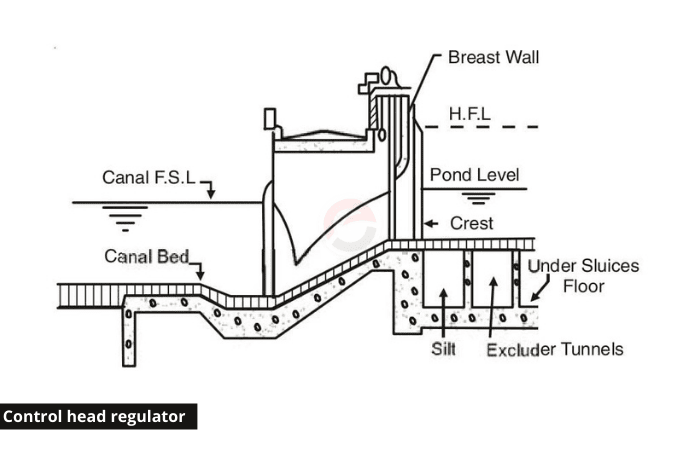 In the rivers, many fishes are migratory. They travel from one end of the river to another end of the river according to the season. In India fishes generally move downstream from upstream in such a warm environment during winter. And return towards upstream before monsoon season for clear water. 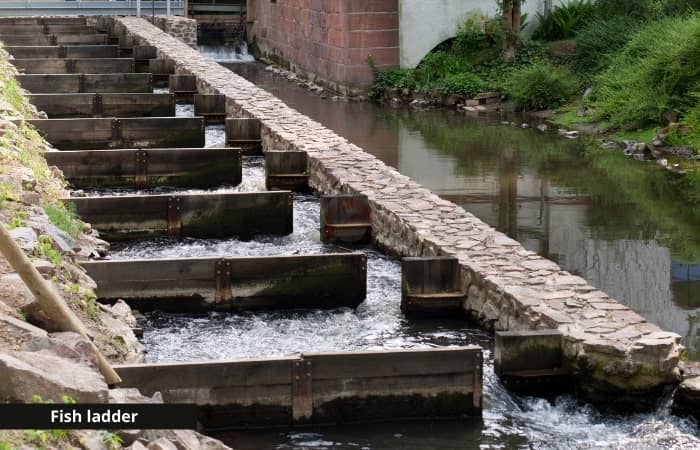 In case of weir or barrage construction migration of the fishes are obstructed and another provision should be needed, If not done then the destruction of fish life on a large scale will be seen in the river. So for fish migration fish ladder is constructed. Most of the fishes can travel on the upstream side from downstream if the velocity of flow will not be exceeded 3.5m/s. so the fish ladder’s design is made accordingly that it constantly passes the water from it and velocity of flow will not exceed this value.

A Silt ejector is a structure situated a little bit downstream from the canal head regulators. It will remove silt or sediments from water coming from upstream and again flushed it back to the river. It removes the water from the bottom layer of a canal through the same long-span tunnel as the canal and discharge it to a nearby drain or again into the river. Silt ejectors consist of a slab a little bit above the bottom of the canal bed. Under the slab, tunnels are provided to eject the heavy silt from the bottom layers and dispose of it through a channel. 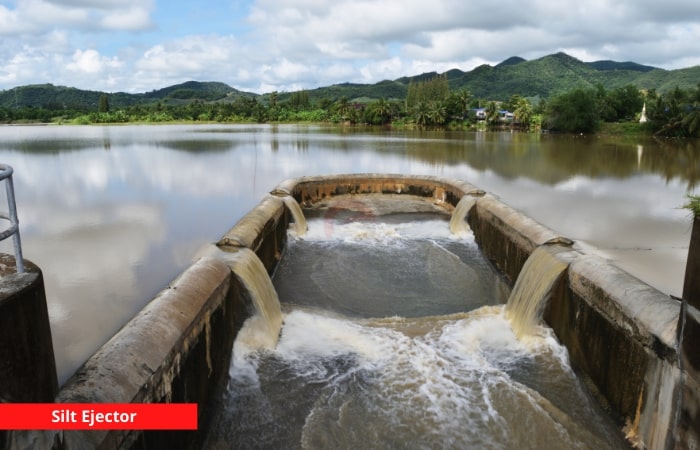 Silt excluder is also a type of silt control device, its function is to exclude silt from water to enter from the canal. Silt excluders are mainly provided on the river bed in front of the canal head regulators. Silt excluders mostly consist of rectangular tunnels resting on the floor of the under sluice pockets. The level of a top portion of the roof tunnel is kept equal to the crest level or sill level of the canal head regulator. These tunnels are made of variable lengths. The Tunnel nearest to the crest level is of the same length as the head regulator. But all other tunnels are may having a length lesser than near to crest.

River training work defined as the different measures is adopted on the river to stabilize the river channel, flow, etc. along a particular cross-section for alignment.

These measures should need to be taken into account because the river on an alluvial plane frequently changes its type of course and may cause damage to its land and other properties.

Guide banks are also a type of earthen embankments provided to restrict the flood water of alluvial river within a reasonable length of waterway straight and non-complicated path towards the construction works across the river. they also prevent the river from frequently changing its course and outer construction which faces across the river. In India, this is first designed by bell so it’s knowns as bell’s bunds. Afterward, it is modified by Spring and Gales and nowadays this modified design is usually adopted.

Diversion head works are used to_____

Diversion headworks are used to obstruct the flow of water in rivers and increase the water level on the upstream side.

The main function of a diversion head works is____

The main function of a diversion headwork is to raise the water in the river and further to divert it into the off-taking canals.

What are different diversion head works?

A diversion headworks is generally planned in case of______

A diversion headworks is generally planned in case of the facility withdrawing the water from the river or reservoir through a canal for irrigation purposes.