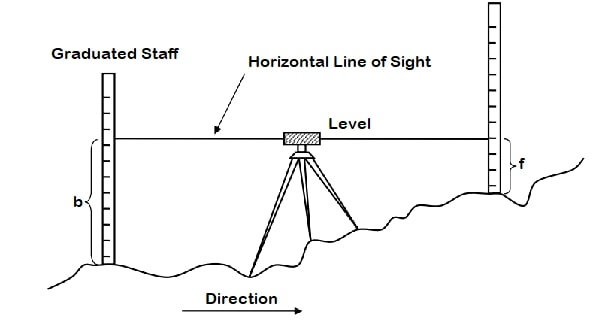 The following instruments used in levelling during surveying

The most often used device in levelling is the dumpy level. The dumpy level is an optical device that is used for surveying and levelling. It is made up of a telescopic tube that is securely kept in place by two collars and adjustable screws. The vertical spindle controls the entire instrument. 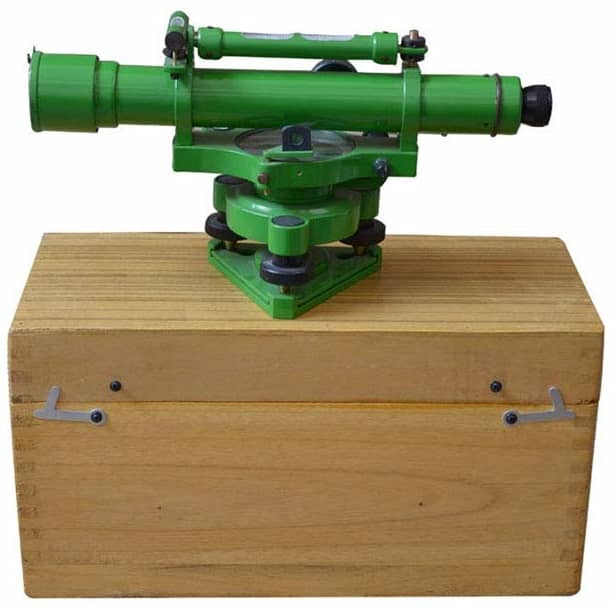 The telescope may be rotated in the horizontal plane when it is positioned on the dumpy level. The dumpy level can be used to estimate the relative height of survey locations on the ground.

The telescope is prohibited from moving in its horizontal plane at this height, and it is fastened to its support. On the telescope’s top, there is a bubble tube. The levelling head, on the other hand, maybe rotated horizontally with the telescope.

The internal focusing telescope is a metal tube with four major components, which are listed below.

The dumpy level works on the idea of creating a visual connection between two or more places using an integrated telescope and a bubble level. Steps can be taken to obtain the desired level of precision.

It’s also known as Surveyors Level, Builders Level, Dumpy Level, and its prehistoric form, “Y(Wye) Level.” The precision of the Dumpy level is the main argument for choosing it over other levelling devices.

For most Tacheometric techniques, a dumpy level is renowned for having high accuracy values. A dumpy level’s accuracy might be as high as 1:4000 for every 100 metres. 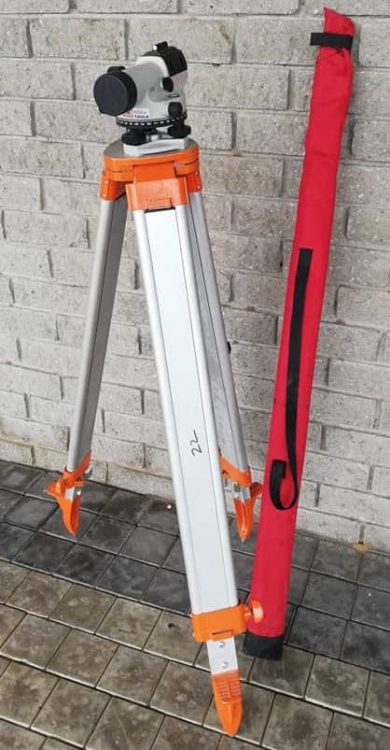 How to Record Dumpy Level Readings? 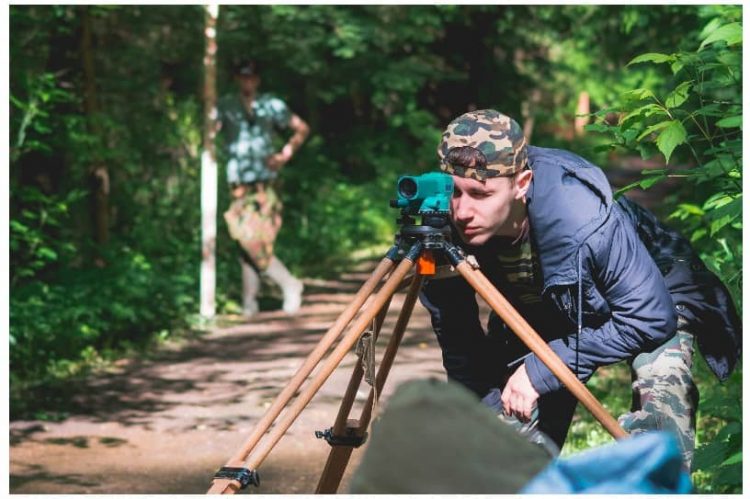 The Y level, also known as the wye level, is the oldest and most bulky of the earlier optical instruments. A low-powered telescope is installed in a pair of clamp mounts, then levelled using a spirit level set parallel to the main telescope. The stage of this instrument has two “wye” supports in which the telescope is mounted.

Two equal-diameter hanging collars are attached to the telescope’s body. The “Wyes” is where these collars lay. The telescope may be adjusted around its longitudinal axis or removed and put in the wyes end-to-end. 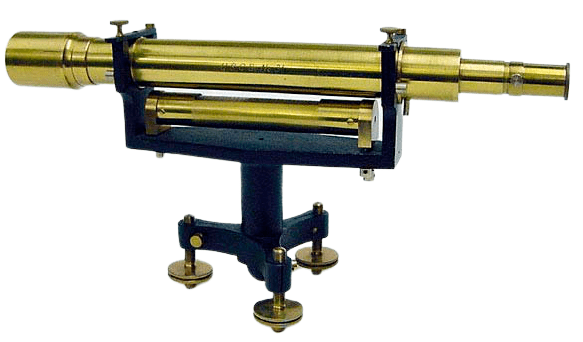 A clamp and a tangent screw are included to aid in precise object sighting. This is a fragile instrument with a significant number of loose and unattached components. Because of the telescope’s reversibility, it may be easier to test it for permanent modifications.

The Cooke’s Reversible Level, built by Cooke, Troughton & Simms, Ltd., Buckingham Works, York, is designed so that the telescope may be levelled for each sight by manipulating a very sensitive setting screw. The ability of a reversible spirit level to select a mechanical axis and a collimation axis in a horizontal plane determines the features of this level.

The spirit level, has both top and bottom surfaces observable, is connected to the edge of the telescope, and therefore is designed in such a way that whenever the bubble takes up an equivalent position relative to index marks for either situation, the instrument is in adjustment, — in other words, whenever the telescope is genuinely level, the bubble is in the central location. 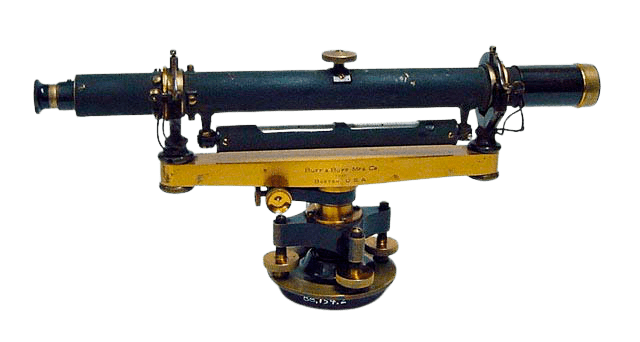 To achieve this, the effective area of the spirit level, which is most easily characterized as barrel-shaped, must be circular at all cross-sections along its length as symmetric in longitudinal section as to its axis.

The bubble will fill the same part of the tube with this axis of symmetry horizontal, but the spirit level can be rotated on its own axis or about another but parallel axis. The spirit level is read using a prism device and magnifier, which is the most exact way yet invented and, when combined with the aforementioned, makes this level an exceptionally accurate and easy levelling equipment.

The telescope is non-removable and cannot rotate in its longitudinal axis while Cushing’s level is present. However, the object and eyepiece ends are reversible and interchangeable. 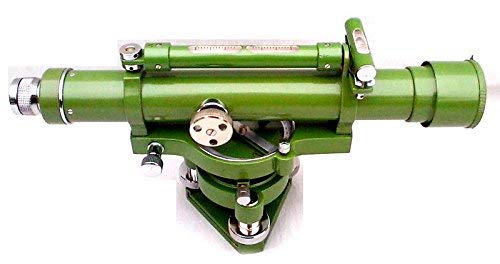 The telescope in Cushing’s level cannot be rotated in its socket around its longitudinal axis, nor can it be removed from its socket and reversed end for end. The eyepiece and diaphragm, on the other hand, may be turned 180 degrees in their fittings, and the eyepiece and object glass can be swapped out, thus reversing the telescope end to end. The fundamental lines of this level, as well as their relationships, are identical to those of Cooke’s level.

The techniques and means of adjustment are the same as in the case of Cooke’s level. 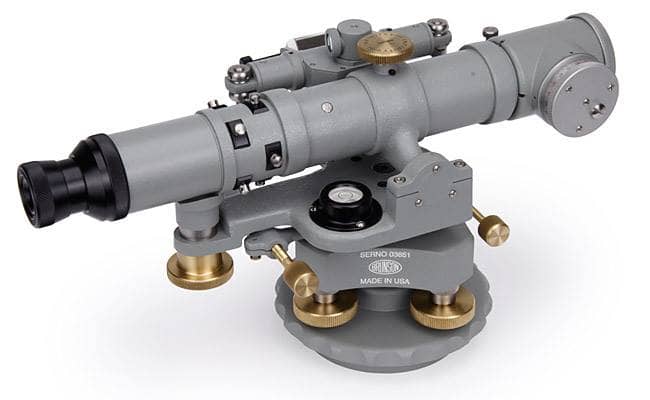 Tilting levels were originally intended primarily for preliminary work, but they have since grown in popularity and are now used for regular levelling as well. The level is termed a tilting level because the micrometer screw tilts the telescope in a vertical plane. The vertical axis of a tilting level is only roughly fixed vertical by levelling screws when it is used for levelling work.

Difference between Theodolite and Dumpy level

Each time a level instrument is put up, a temporary correction must be made before any staff observation. It entails a series of well-defined activities that must be completed in the correct order.

The temporary adjustment of a dumpy level entails the following steps: 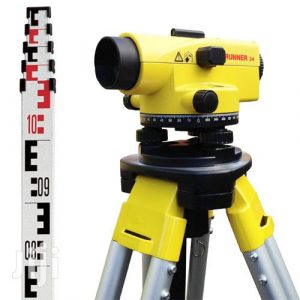 Levelling is done by using which instrument

For a large number of intermediate sights, it is faster and less laborious.

How to use levelling instrument?

It’s used in combination with a levelling staff to determine the relative heights of items or markings.

Explain the importance of level tube in a levelling instrument

A level tube is used during construction to ensure that all sides of the wall are the same height.