In the anhydrous state, four main types of minerals are normally present: alite, belite, celite and felite. Also present are small amounts of clinker sulfate (sulfates of sodium, potassium, and calcium) and gypsum, which was added when the clinker was ground up to produce the familiar grey powder.

Almost immediately on adding water some of the clinker sulphates and gypsum dissolve producing an alkaline, sulfate-rich, solution. Soon after mixing, the (C3A) phase (the most reactive of the four main clinker minerals) reacts with the water to form an aluminate-rich gel (Stage I on the heat evolution curve above).

The gel reacts with sulfate in solution to form small rod-like crystals of ettringite. (C3A) reaction is with water is strongly exothermic but does not last long, typically only a few minutes, and is followed by a period of a few hours of relatively low heat evolution. This is called the dormant, or induction period (Stage II).

This corresponds to the main period of hydration (Stage III), during which time concrete strengths increase. The individual grains react from the surface inwards, and the anhydrous particles become smaller.

(C3A) hydration also continues, as fresh crystals become accessible to water. The period of maximum heat evolution occurs typically between about 10 and 20 hours after mixing and then gradually tails off.

In a mix containing OPC only, most of the strength gain has occurred within about a month. Where OPC has been partly-replaced by other materials, such as fly ash, strong growth may occur more slowly and continue for several months or even a year.

Ferrite reaction also starts quickly as water is added, but then slows down, probably because of a layer of iron hydroxide gel forms, coating the ferrite and acting as a barrier, preventing further reaction. 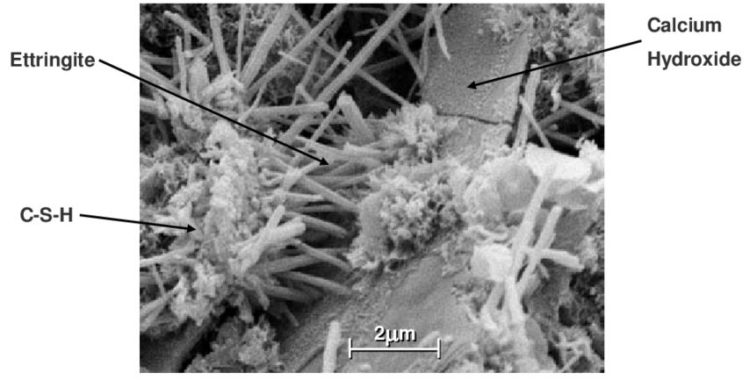