What is Stub Column?

A stub column is a type of column whose length is short and baseless which means do not have a foundation and footing as its rests on a beam or slab. It acts as a point load on the beam.
A stub column does not fail by buckling because of its short length and It is constructed between one floor only.

Stub column is defined as the short compression member which do not have a foundation or footing and which directly rests on a slab or column to transfer the load on the primary beam. It is constructed on the beam to carry the extra load that is act over it.

What is the Purpose of the Stub Column?

The purpose of stub column is providing to increase stiffness( the rigidity of a structural element that is able to resist deformation under the action of an applied force). A stub column is used to transfer load one from another beam. 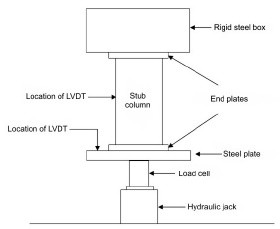 The stub column is used when the length of the beam or slab is increased due to any case then it is constructed over the beam. It is also constructed as an interior or architectural point of view and used to increase the stability of the building.

Also Read: Guide on Different Types of Beam and its Classification

A test is also performed which is called the stub column test to find out the strength of the column.