The (three) 3-point bend test is conducted on flexural members of the structure such as the beam. A beam is a flexural member that is subjected to bending on the application of load. Consider a simply supported beam resting on two supports. The support may be either roller or hinged. Let us see the bending action of the beam shown in the figure below.

As seen in Fig 2 the load ‘w’ acting on a beam of length ‘L’ causes bending action in the beam.

Fig 3: Deflection of the beam due to load ‘w’

Fig 4: Bending stresses in the beam

Here are a few assumptions to be made in the beam bending theory. They are:

To determine the flexural stiffness of the beam specimen.

The arrangement of the apparatus arises from the concept of the simply supported beam subjected to the load and is by ASTM-C78.

The apparatus consists of a loading unit and a supporting unit. The load is applied by the two rollers that are connected to the head of the bending machine as shown in Fig 5 below. These rollers are resting on blocks to ensure that the load applied to the face of the beam specimen is at a right angle without developing any eccentric load. 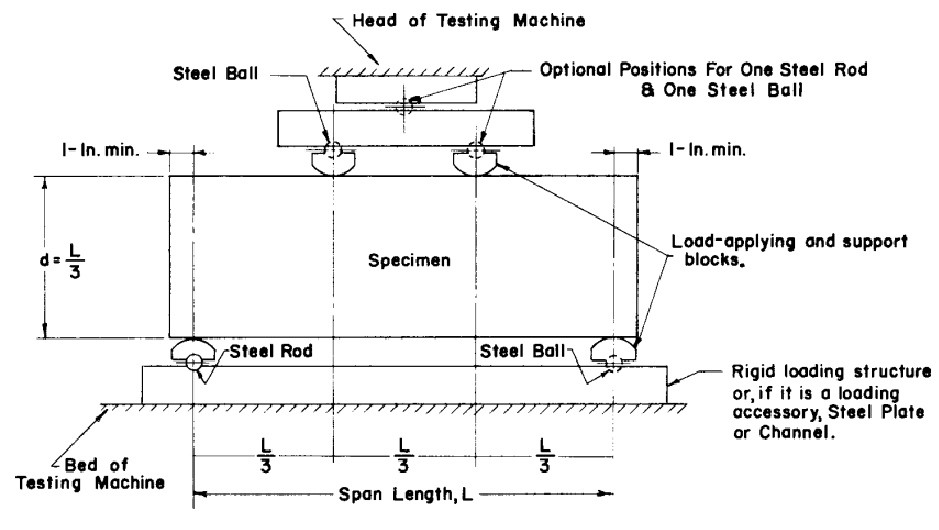 The loading rollers apply in the middle third span of the beam specimen ( at a distance of L\3 from the ends of the beam) as seen in Fig 5.

As per Cl4.2.2 of ASTM-C78 it must be ensured that the ratio of the distance between the applied load and the nearby support reaction (the horizontal distance) to the depth of the beam must be 1.0 and can vary only by +0.03mm or – 0.03mm. 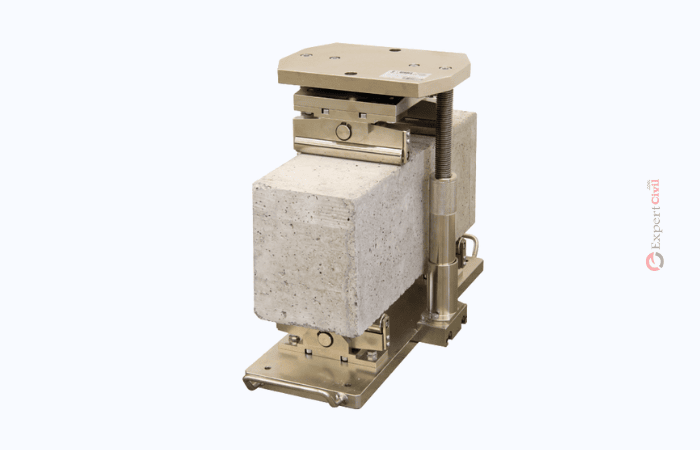 The blocks of loading and supporting units must not be more than 64mm in height from the central axis of the pivot and these blocks must extend across the width of the specimen ( Cl4.2.3 of ASTM -C 78). The loading block and supporting block must be held in the vertical direction and are connected to the balls of the rollers using spring screws.

The beam specimen to be tested must have a rectangular section. The surface of the casted specimens must not have any holes, or indentations and must have a smooth finish.

The specimens must be cast according to the sizes of the cast specified in ASTM standards ( C42, C31 or C 191). As per the ASTM standard, the sides of the specimen must be at right angles to the top and bottom of the apparatus.

The test should be carried out on the cured specimen that has a still moist surface. Because the surface of the beam specimen is dried then the measured flexural strength value is reduced.

Now the loading unit must be adjusted such the loads are applied in the middle third of the beam span. The loading block is now brought in contact with the surface of the specimen and the load is applied within the range of 3 to 6 % of the calculated ultimate load.

Basically, as per ASTM-C78, the load is applied to increase the stress at the extreme fibre of the specimen at the rate of 0.86 to 1.21 MPa\min.

The rate of loading is calculated using the following equation:

Measure each dimension thrice, one at the centre of the face and at the edges and determine the average width and depth that are used to calculate the modulus of rupture which in turn determines the flexural rigidity of the beam.

The formula for modulus of rupture:

1. If a fracture occurs in the middle third span of the beam on the tension side then the modulus of rupture is given by

a = average distance between the fracture line and the nearby support measured on the tension side of the beam in mm.

Hence, after getting the modulus of rupture value from the 3-point bend test, the stiffness of the beam under bending action can be determined using flexural rigidity.

Differentiation between the tensile test and 3-point bend test

The tension test is carried out on the beam only to access the rigidity of the beam when subjected to axial load.

This test measures the rigidity in terms of young’s modulus by a graphical method which can be used to characterise the material of building in terms of their stiffness and is not capable to measure the behaviour of the beam in bending cannot be measured using the tensile test.

Therefore for that, we need to conduct a 3-point bend test to determine the stiffness of the beam in bending action.

As a result, the distribution of maximum stress is more uniform and wider in the 4- the point bend test as compared to the 3-point bend test.