Shear key is a part of a structural element which is used for stability against the lateral loads. The shear keys applications vary according to the nature of the loading and type of construction. 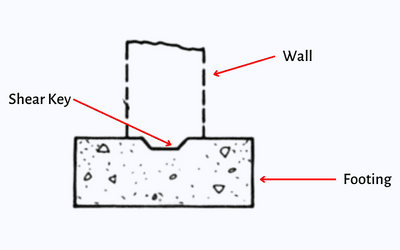 The shear key is constructed between two structural elements in most of the cases but for retaining wall like structures the shear key is attached to the main structure but resting in the soil provides the stability.

What is shear key in construction?

The friction and any projection from the base resist the lateral loads that are applied on the retaining wall. The base can resist the later loads up to a certain extent based on the friction between the concrete and the rock. The shear key is needed to be designed depending on the applied loads for bending and shear. 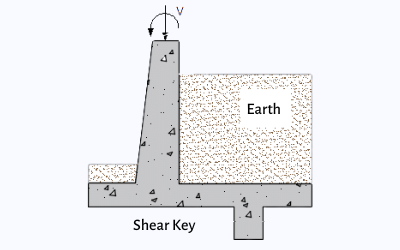 To increase the sliding resistance in retaining walls the shear keys are provided at the base. The provided shear keys should be proportioned in a way that the width of the shear key should be at least twice its depth to develop the strength of the key in shear instead of flexural as per ACI 317 – 17.

Design of shear key in bridge

In bridges to provide support to the superstructure under lateral loads, the shear key is placed in the abutments of the structure. In resisting the seismic loads the shear keys in the bridge play a significant role. 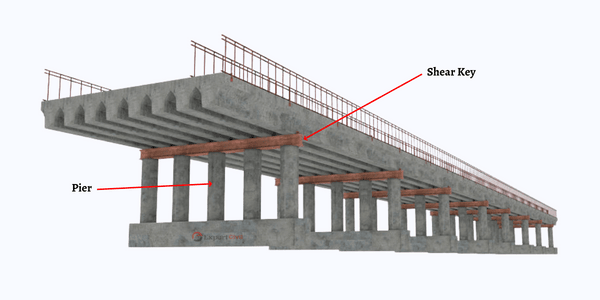 A different shear key in the form of a block of T-section or I-stub is welded onto the bottom of the base plate and is used to resist the shear force in the column at its base.

Function of shear key in column

Shear keys in columns primarily serve to augment the additional passive resistance created by their height; they also create active pressure. The shear key which is provided during the construction joint of the column stops the sliding of the column from the joint by increasing the factor of safety for sliding during the failure of structure. 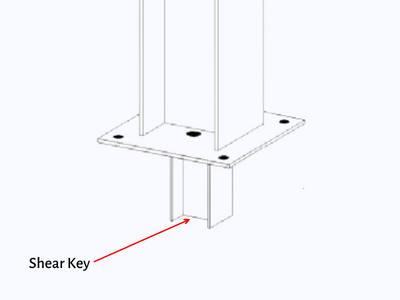 The construction joints are provided in the beams and slab, whereas the shear keys are to be provided in each slab and beam.

To resist the lateral loads applied externally and internally, the shear keys are provided in the shear walls. The connection to the other walls is made by a wall’s projection. The shear key joints could be in provided in the vertical as well as the horizontal direction.

What is the purpose of shear key?

The shear key at the joint transfers the shear force due to the applied loads between the structures.

What is the alternate of shear key in retaining wall?

Reinforcement bars is the alternate of shear key in retaining wall

Why shear key is provided?