Close
Ask a Question
Home| Building Construction|What are the different types of scaffolding?

What are the different types of scaffolding?

The temporary structure constructed to support a safe working platform for workmen and materials required during building operations is known as a scaffold, and the method of its construction is called scaffolding.

Following are the different types of scaffold or scaffolding:

Let us Discuss one by one and know more about the scaffolding.

It is an ordinary and cheap type of scaffolding and is also known as a single scaffolding.

Most of the members of this type of scaffolding are made of bamboo. 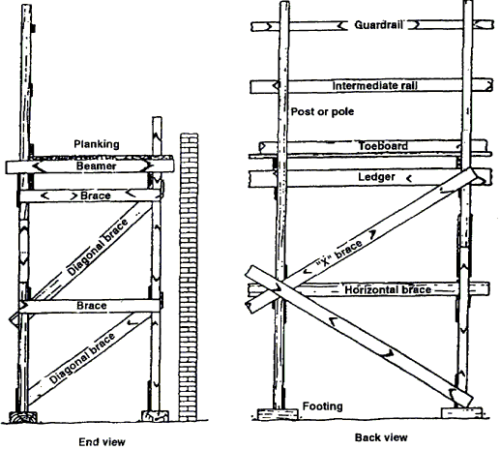 It is also known as double scaffolding. It is stronger than brick layer’s scaffolding This scaffolding consists of two rows of standards, one close to the wall within 150 mm of the face and the other 1 m to 1.5 m away from the face and of the wall.

Other specifications and constructional features are the same as discussed in Brick layers’ scaffolding, except that put logs supported both ends on ledgers.

This type of scaffolding consists of a platform supported by a series of cantilever or needle beams, passing through window opening or through hole left in the wall On the outside, the and of the needle beam is supported by struts.

This scaffolding consists of a single or double rows of tubular standards with tubular horizontal and cross-pieces, having special couplings and set of the screw for junctions and joints. The initial cost of steel scaffolding is higher than other types of scaffolding but its maintenance cost is very low. This type of scaffolding lasts longer. Steel scaffolding can be carried in position and dismantled easily and rapidly.