If you want to be a successful civil engineer, then you need to know all about the  technical terms used in brick masonry, i hope this article will definitely help you.

Masonry may be defined as the art of construction in which building units, such as clay bricks, sand-lime, bricks, stones, Precast hallow concrete blocks, concrete slabs, glass bricks, combination of some of these building units etc are arranged systematically and bonded together to form a homogeneous mass in such a way that they can with stand point to other loads and transmit then through the mass without fail or disintegration. 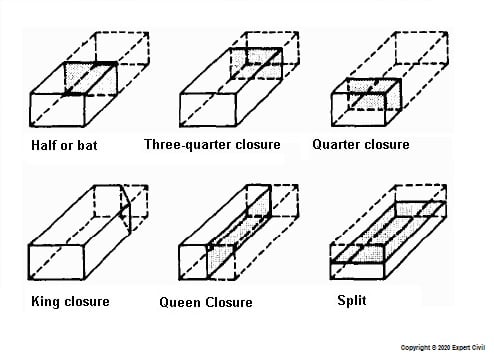 Buttress: It is a sloping or stepped masonry projection from a tall wall intended to strengthen the wall against the thrust of a roof.

Bed: the surface of a stone perpendicular to the line of pressure of (lower surface of bricks or stones in each course)

Back: The inner surface of wall not exposed is called back. the material forming back is known as backing.

Course: A course is a horizontal layer of bricks stones.

Hearting: It is the interior portion of a wall between facing and backing.

Head: It is a brick or stone, which lies with its greatest length at right angles to the face of the work.

Stretcher: It is a brick or a stone which lies with its congest side parallel to the face of the work.

Bond: The method of arranging bricks so that the individual units are tied together.

Spalls: The chips of stones used for filling the interstices in stone masonry.

Quoins: The stones used for the corners of walls of structure.

Bat: It is a portion of a brick cut across the width.

Closer: It is the portion of a brick cut in such a manner that its one long face remains uncut.

Queen closer: it is the portion of a brick obtained by cutting a brick length-wise into two portions.

Bevelled closer: It is the portion of a brick in which the whole length of the brick is bevelled for maintaining half width at one end and full width at the other.

Frog: It is an indentation or depression on the top face of a brick made with the object of forming a key for the mortar.

Sill: It is a horizontal stone, concrete or wood, employed for the purpose of shedding off rain water from the face of wall immediately below the window opening.

Corbel: It is the extension of one or more course of stone or brick from the face of a wall to serve as a support for wall plates.

Templates: Pieces of stones placed under the end of a beam to distribute load over a greater area.

Coping: It is the course placed upon the exposed top of an external wall to prevent the seepage of water.